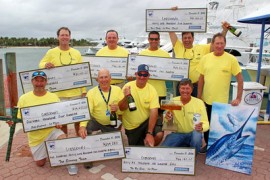 Operation Sailfish, Leg 1 of the iconic Quest for the Crest Sailfish Series was held on December 7-11 out of Sailfish Marina in West Palm Beach, FL. An overwhelming spirit of patriotism poured through the crowd during the opening ceremony as the National Guard presented the colors to the singing of the national anthem. On the day preceding tournament competition, a ‘Take a Hero Fishing Day’ was held where teams had the opportunity to host military veterans, wounded warriors and active duty soldiers on their boat for a day of fishing. As an added bonus, the event offered trophies for the top military team and top military angler on the hero fishing day. Operation Sailfish’s 2015 champs, BAR South, put Charlamain Caycedo on two sailfish releases for the day – enough to earn her the top military angler title and the trophy. Team Crescendo managed to catch one sailfish for their military angler Mark McManus, however, they posted a total of six releases for the day to claim the top team trophy for the most releases.

With the dawn of Day 1 of the tournament, the energy was electric as 47 teams prepared to do battle for their share of a $680,000 purse. A weather forecast with north winds of 15 to 20 mph had teams anxiously anticipating what might be an epic bite. Team Utopia, reigning champions in the series, got off to the right start with a double in the first hour of fishing. Blue Moon entered the tournament with plans of targeting the meat fish calcutta. However, a triple-header and another single had them leading the fleet with four releases by midday causing them to rethink their strategy! Sandman, top team from the 2016 Final Sail tournament, was just behind them on time with four releases as well. With only a couple hours to go Blue Moon, Sandman and Advanced Roofing/Sailsmen were locked up in a three-way tie for first place with four releases each. In the last hour, Advanced Roofing/Sailsmen released two more fish to claim the $82,530 daily. Sandman finished second on the day earning a $40,770 payout.

Gusting winds, rainsqualls and building seas made for a challenging day of fishing on Day 2 of the tournament. Lion’s Den jumped out to a hot start releasing five fish before noon to claim the early bite. They also landed a 39.6-pound cobia that turned out to be the heaviest fish of the tournament. They finished in 8th place with seven releases and $38,100 in prize money, thanks in large part to the big cobia.

Team Seraphim, winners of 2016 Sailfish 400, also had a great Day 2 with seven releases and a second place daily that was good for $45,770. With only an hour to go in the tournament, teams Crescendo, Contender One, Sandman and Weez in the Keys were locked up in a 4-way tie for first with Crescendo leading on time. Two minutes before lines out, the anticipated call came over the VHF…. “Boat #2 hooked up!” A quick glance at the boat list confirmed that Boat #2 was team Crescendo. They went on to release the fish in their Mercury powered center console just four minutes after lines out and secured their first victory ever in the Quest for the Crest Sailfish Series. Despite being one of the smallest boats in the fleet, Captain Skip Dana and his crew still managed to get the job done. They were all smiles as they accepted the champions’ dog tags and their check for $239,280! Contender One finished in 2nd (for the second year in a row) with earnings of $67,470, followed by Sandman in 3rd with $61,850 and Weez in the Keys in 4th for $8,000. Team Family Matters also had a great tournament finishing in 5th Place with eight releases.

Master Angler of the tournament went to John “J” Walls of Finster with a total of five releases. The Top Lady Angler was Stephanie Choate of Miss Britt with five releases and the Top Junior category was awarded to Matthew Yee of Reel Captivating with one release.

The added value Release Roundup category had a staggering $100,800 in prize money up for grabs during Operation Sailfish; however, no team was successful in claiming the prize. The purse will roll into the next leg of the Quest for the Crest series, Sailfish 400, where it is expected to exceed $130,000.

Three more legs remain before the top sailfishing team in the world is crowned. Leg 2, Sailfish 400, takes place January 11-15 in Miami, with a 3rd stop in Fort Lauderdale on February 22-26 and the grand finale in Key West on April 25-30. For a complete breakdown on the tournament results for Operation Sailfish, visit www.operationsailfish.com For a complete list of the point standings in the Crest race, visit www.questforthecrest.com