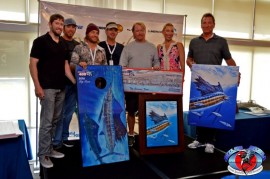 A record setting field of 47 teams and a record setting purse of $665,000 had teams on the edge of their seat for the second leg of the Quest for the Crest Sailfish Series. A low pressure system passed through the day before the tournament and sent temperatures plummeting to the low 50’s with a wind off the northwest on Day 1 of Sailfish 400. Despite really fishy conditions, teams struggled on the first day of the tournament and they had to make every bite count.

Team Priceless did just that, releasing six fish on Day 1 to claim the top spot in the fleet and $35,100 in daily money. Teams Miss Britt, OCD and Fishless trailed close behind with five releases each. Registering across the board in the tournament bets paid dividends for Miss Britt with a $78,000 payday on Day 1. Fishless also scored big with a $38,000 payday on Day 1.

On Day 2 of the tourney, the wind clocked around a bit more off the north and the bite picked up significantly with several teams calling in fish shortly after the 7:30am lines-in announcement. Team Liquid got off to the hottest start of the day releasing six sailfish by 11:30am. While Liquid was racing up the leaderboard, Team Seraphim was quietly making some waves of their own with a steady sailfish bite. With only a couple of hours to go in the tournament, Seraphim pulled into a tie with Liquid, each of them with nine releases. Not long after, Seraphim hooked and released a double header to move ahead with 11 releases and they never looked back. Captain Jerry Pohl and his crew on Seraphim took 1st Place overall in the tournament and cashed their first check ever in the Quest Series in the process. At $247,000 in total earnings, it was definitely a check worth waiting for! In addition to their monster payout, Carl Lindner also claimed the Top Male Angler title in the tournament with five releases.

The real battle for position happened in the last 10 minutes of the tournament. Five teams were in a dead tie for the 2nd Place spot with nine releases each, with Liquid holding the lead on time. At 3:51pm Captain Quinton Dieterle of team Contender One called in a hookup and minutes later called in the release to jump ahead of Liquid on the leaderboard in 2nd Place. With just 1 minute left before the 4pm ‘lines out’ call, team Priceless called in a hookup that would push them into the 3rd Place position with 10 releases if they caught the fish. About 10 minutes later Captain Jorge Sanchez called in the release and made it official. Contender One finished in 2nd Place with a total payout of $78,410, followed by Priceless in 3rd with $55,540 and Liquid in 4th with $55,360. Team Fishless also added to their Day 1 winnings by catching the heaviest kingfish of the tournament, a 48-pounder, on Day 2. The fish netted them near $18,000 in big fish money for total earnings of $56,140 in the tournament.

For the first time in the history of the Quest for the Crest Sailfish Series, the Master Angler title was awarded to a lady angler. CeCe Imbrie, of team OCD, bested her fellow female and male anglers in the tournament with a total of six releases. Top Junior Angler bragging rights went to Reed Ekey on ECO Fishing Team with one release.
Ties to NASCAR, Homestead Miami Speedway and its charity ‘Driving for a Cause’ were the inspiration behind the race theme for Sailfish 400. As an added bonus, the Top 8 teams also had the chance to win an amazing prize pack from Homestead Miami Speedway. Six tickets to the Ford Championship Weekend that included the Ford EcoBoost 200, Ford EcoBoost 300, Ford Eco Boost 400, Pre-Race Pit Passes, Post-Race Victory Lane Access, Pace Car Rides and a VIP Parking Pass went to the 5th Place team in the tourney, team Qualifier!
Only two legs remain in the Quest for the Crest before a world champion sailfishing team is crowned. Leg 3, Sailfish Challenge, takes place February 17-21 in Fort Lauderdale and the finale stops is in Key West on April 12-17. For a complete breakdown on the tournament results for Sailfish 400, visit www.sailfish400.com. For a complete list of the point standings in the Crest race, visit www.questforthecrest.com